Many gas stations are promoting E0, or gasoline with zero percent ethanol. It not only costs more than regular gasoline which contains 10% ethanol, new data shows it also burns dirtier in your engine which then puts more toxic emissions into the air.

Urban Air Initiative tested every E0 in Wichita, Kansas and compared them to regular gasoline which contains 10% ethanol. The testing found toxic aromatics such as benzene and toluene were about 45% higher with E0. Benzene and toluene, which are known carcinogens, are added by oil refineries to boost octane in vehicles. However, these toxins create harmful emissions that cause air pollution which impact public health. 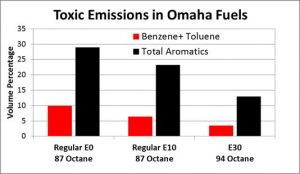