A Salute to President Bush

During this week of remembrance and tribute for the 41st President of the United States, UAI would like to add our voice in saying farewell to a great American who, among many great character traits, was a great supporter of clean air and ethanol. 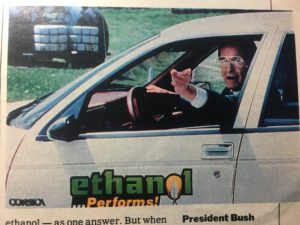 This photo was taken in June of 1989 when George Bush visited Lincoln, Nebraska and toured the nation’s first facility producing ethyl tertiary butyl ether (ETBE).  The Nebraska Ethanol Board, led by Administrator Todd Sneller and Board Member Dave Hallberg, along with  the Clean Fuels Development Coalition hosted the President’s visit which was made possible through the strong support of C. Boyden Gray, Counsel to the President and a huge supporter of alternative fuels.

President Bush kept true to his promise to be the “environmental President” as he took an active role in the passage of the Clean Air Act Amendments of 1990, the first time air pollution had been addressed since the bill first passed in 1970. Key to the alternative fuels movement were the Mobile Source provisions that established the oxygen requirements for year round Reformulated Gasoline. Ultimately that led to the RFS and the growth of the ethanol industry.

We salute President Bush for his service to our country and leaving us with a legacy of cleaner air and energy security.