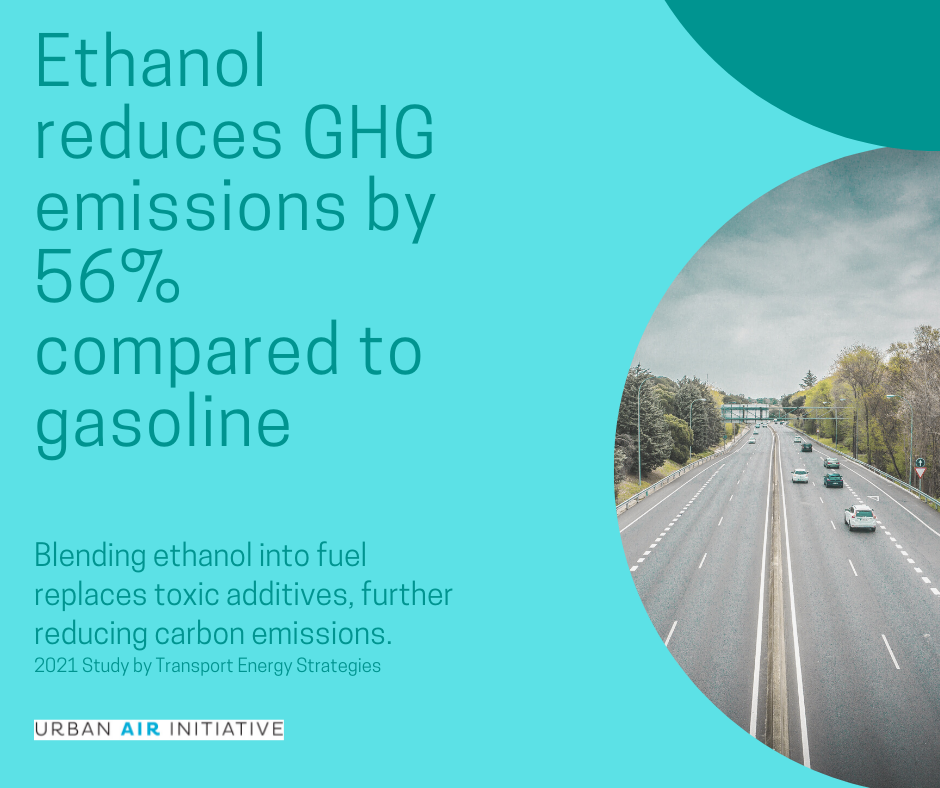 September 29, 2021: Replacing toxic carcinogens in gasoline provides a huge boost to an already impressive carbon reduction number for ethanol, according to a new study published by Transport Energy Strategies (TES), a leading energy consultancy with expertise in emissions, fuel and oil refining.

TES found that ethanol’s inclusion in the fuel supply has had an even greater impact on reducing carbon emissions than previously determined. This occurs because ethanol replaces toxic aromatics in gasoline, the most carbon intensive component of the fuel. Ethanol has the highest octane rating of any other additive and reduces the need for these known carcinogens at an oil refinery.

Based on the findings by TES, Urban Air Initiative calculates that when credited for lowering aromatics, ethanol’s greenhouse gas (GHG) emissions are 56% lower than gasoline, compared to the currently modeled 43% reduction.

“For years, the ethanol industry has touted the value of displacing aromatics with ethanol from an air pollution and public health standpoint, but no one has, to our team’s knowledge, ever truly factored in what displacement might mean for carbon intensity and for reducing GHG emissions,” said Tammy Klein, founder and CEO of Transport Energy Strategies and a member of the study team. “Our findings break new ground.”

Until now, all of the modeling around corn ethanol and carbon centered on the lifecycle analysis of how ethanol gets from the corn field through the processing stage. TES looked into the carbon impact of blending ethanol into gasoline in order to more accurately assess the total lifecycle. The study found that the displaced aromatics have a high carbon score, and the inclusion of ethanol therefore improves the GHG impact of the finished fuel. This advantageous blending attribute is due to ethanol’s high octane rating and has been neglected in prior literature.

“This is just one more example of how ethanol helps decarbonize liquid transportation fuels. It’s a readily available, clean, plant based solution that’s already made more of a difference than it has been credited for. The findings by TES demonstrate the need to update the current science and recognize ethanol’s ability to have an even larger carbon benefit with increased availability of higher blends,” said Urban Air Initiative President Dave VanderGriend.

VanderGriend said the goal is now for ethanol’s updated carbon score to be incorporated into a calculation of the Greenhouse Gas and Regulated Emissions in Transportation (GREET) – Model, which is the gold standard of GHG emissions modeling developed by the Department of Energy through their Argonne National Laboratory.