An unexpected consequence of removing lead from gasoline was a dramatic increase in toxic aromatics. For example, in 1971 leaded gasoline averaged a level of 22 percent aromatics. But by 1987, when lead was removed due to its toxic effects, an octane replacement was needed. Refiners turned to aromatics and the number increased to an average of 37 percent. That’s a 68 percent increase of a toxic material.[1] 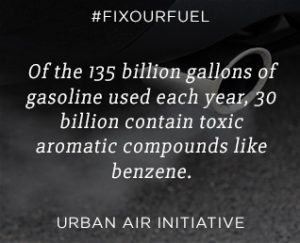 Aromatics are created during the process of refining crude oil into gasoline. Aromatics happen to be the most expensive, carbon-intensive, toxic, and environmentally harmful component of gasoline. Still today, about 25 to 30 percent of the 135 billion gallons of gasoline sold in the U.S. are aromatics.[2] That is more than 30 billion gallons of carcinogens dumped into gasoline…dumped into the air…dumped into the American bloodstream each year.[3]

And, as we explained in the “The Problem” section, the 45 million people living, working or attending school in urban areas of the U.S. are disproportionately affected by these toxic emissions. The research related to the health dangers of air pollution and what it’s costing society is staggering. For instance, a report by the Organization for Economic Cooperation and Development (OECD) targets air pollution as the biggest environmental cause of premature death globally, overtaking poor sanitation and unclean drinking water. Road transport emissions are blamed for half of the premature deaths.[4]

Closer to home, the Massachusetts Institute of Technology (MIT) placed premature deaths from air pollution in the U.S. at 200,000 per year. According to MIT, exhaust emissions from road transportation were the most problematic, causing approximately 53,000 premature deaths in 2005.[5]

Seven of the “Top 10 Causes of Death” in the U.S. are associated with the research we discovered about the harmful health effects from air pollution, including benzene, and benzene emissions from burning aromatics and MSATs.[6]

If the health statistics aren’t startling enough, consider the financial burden our society is facing due to toxic emissions from gasoline. The World Health Organization (WHO) estimates the annual economic cost of premature deaths from air pollution across designated countries at $1.431 trillion (USD).[7] 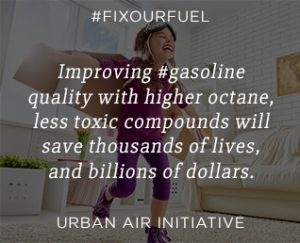 According to research in Lives per Gallon: The True Cost of our Addiction to Oil, the Institute for Transportation Studies at the University of California, Davis determined the minimum external cost of air pollution from motor vehicles in the U.S. at $24.3 billion every year.[8]

We as a country and a world can do better. There is already proof that reducing air pollution saves lives and dollars. When Congress asked for an evaluation of the benefits and costs of all federal regulations in 2007, it found the largest estimated benefit was from the reduction in air pollution from just one air pollutant: fine particulate matter. The benefits were estimated at between $18.8 billion to $167.4 billion per year, compared to a cost of $7.3 billion per year. [9]That translates to a benefit-cost ratio of between 2.5 to 1 on the low end and possibly up to 20 to 1 on the high end. These are pretty astounding numbers for the benefits that were initiated by a 1993 Harvard study. That specific study ultimately led to a new agenda for air pollution research, new air quality standards, improved air quality, and evidence of the benefits of cleaner air.”[10]

And this was still with at least 25 percent aromatics in our fuel and no regulations on the even more dangerous ultrafine particulates damaging our bodies with every breath we take. As you can see from the research we’ve outlined, mobile source air pollution hasn’t been a priority of the EPA, despite Congressional mandate.

Click here to the next section, What’s Been Done

[4] Organization for Economic Cooperation and Development (OECD), The Cost of Air Pollution, Health Impacts of Road Transport, May 21, 2014
http://www.oecd.org/env/the-cost-of-air-pollution-9789264210448-en.htm

[6] Centers for Disease Control and Prevention, National Center for Health Statistics, Number of deaths for leading causes of death
https://www.cdc.gov/nchs/fastats/leading-causes-of-death.htm