Why it’s Not Working

For more than 30 years, a handful of career government civil servants and contractors at EPA/OTAQ in Ann Arbor, Michigan, have shaped transportation fuels regulatory policy in the United States. Presidents — both Republican and Democrat — have come and gone, but these core career bureaucrats have remained and continue to direct transportation fuel regulatory policy.[1] 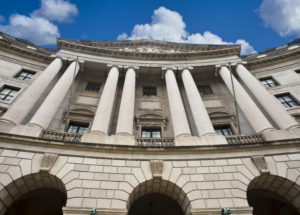 Besides the career bureaucrats, our research found that lobbyists are involved when there is turnover within the EPA/OTAQ. Laws made in the public’s interest that create energy, environmental, economic, and public health policy are influenced by conflicting special interests.

According to OpenSecrets.org, a service of the Center for Responsive Politics, 73 percent of American Petroleum Institute (API) lobbyists had previously held government jobs in 2016-2017. But the door swings both ways. API lobbyists are also becoming bureaucrats in the “Alphabet Agencies,” like the EPA and OTAQ. According to the Washington Post, it appears this trend has not only continued for at least ten years, it is far above the standard for any other industry lobbyist group. “Three of every four oil and gas lobbyists worked for the federal government, a proportion that far exceeds the usual Revolving Door standards on Capitol Hill.”[2] 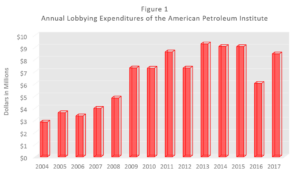 It’s not illegal to petition or lobby our government. However, there are rules to protect the integrity of our political system. Most important is the transparency of money spent on specific legislation, by specific industries, by specific people, and with specific stated interests. If lobbying our government was not such a problem, there would not be a need for such an oversight process or watchdog.

In 2017 alone, the oil industry had grown to 775 lobbyists, and 512 of them (65 percent) are on the www.OpenSecrets.org revolving door watch list. The EPA is on the oil industry’s target list because the EPA experienced an upswing in lobbying activity after the passage of the Renewable Fuel Standard (RFS2) in 2007. On the other hand, there are fewer than 50 lobbyists representing the biofuels industry.[3]

Click here to the next section, Flawed Fuel Testing