The Best Value of Ethanol

Two simple words have helped a gas station owner change consumer habits and sell more ethanol in Wichita, Kansas. The simple yet effective message is prompting consumers to rethink what fuel they put in their car. 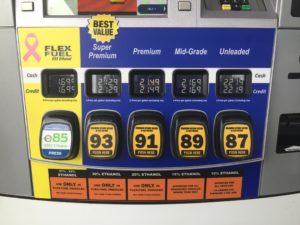 Phil Near with JumpStart Fuel put a best value sticker over his E30, super premium fuel. He came up with the idea to draw attention to the fact that the consumer can get a 93 octane for less money than regular. Since so many drivers automatically pull up and assume the regular 87 octane is the cheapest, he wanted something to make drivers stop and pause.

It’s working, since adding the best value sticker, E30 super premium sales continue to grow each month. Near says he doesn’t receive many questions before drivers fill up and he’s had zero complaints once they’ve tried it. He prices E30 super premium nine cents less than regular, so once drivers make the switch they are not likely to go back.

Near is passionate about promoting ethanol not only for its octane boost but also for its health benefit. His wife, Cheryl Werth Near is a breast cancer survivor and they’ve made it their mission to promote cleaner fuels. They were featured in PUMP the Movie and run a Pink at the Pump campaign during Breast Cancer Awareness Month in October.

Urban Air applauds Near for taking steps to make sure his community not only has access but also chooses ethanol blends for the octane boost, cost savings and health benefits.