Ethanol To The Rescue of Higher Gas Prices 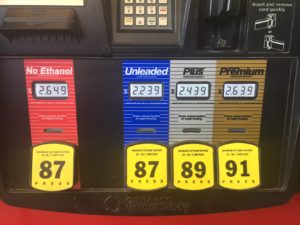 While it might be a bit overly dramatic to call it a gathering storm, there are already clear signs that the low gasoline prices we have been enjoying for the last several years are about to come to end.

A lot of people might forget that it was only three years ago when the average price of a gallon of regular gasoline cost $3.34 and at times nudged the $4 mark. Dropping below $2.50 from 2015 through 2017 made it easy to forget that gasoline is not only expensive but we have very little control over it. Well, get ready for a costly reminder.

Several forecasts by GasBuddy and government energy analysts are predicting the price creeps that began late in 2017 will continue through 2018. The reason is economics 101– reduced supply raises prices. The dramatic increase in oil production in the US has masked the fact that oil is a volatile commodity that is impacted by world events, regardless of where it comes from. And the people that produce oil can control the supply which they have done through production cuts agreed on by OPEC– remember them?  The Organization of Petroleum Exporting Countries is without question one of the most blatant examples of a monopoly in history. A bunch of guys producing a product we literally cannot live without and when they don’t feel like they are making enough money, they cut production.

While the price creep we are seeing does not equate to the true price shocks of the past, we are one world event away from seeing spikes in dollars, not cents. Witness the protests in Iran over the past few weeks– many analysts point to that as a price driver of world oil and it underscores that we are still dependent on foreign sources.

If gasoline increases by 20 cents per gallons across the U.S., that’s an additional $30 billion for the oil industry. So how do we fight back? The answer lies in higher ethanol blends.

Ethanol continues to sell for significantly less than gasoline, about 40 cents cheaper. That means the 14 billion gallons already being used across this country for E10 is saving American motorists nearly $500 million  annually. Translate that your wallet and it represents a $6 per fill-up savings for of an average 15 gallon tank. And if you have access to higher blends of ethanol, like E20 or E30, the savings are even greater. Mid-level blends are premium high octane fuels selling at regular prices.

And we need to be thinking in these terms– high octane fuels are going to be the norm over the next decade. The efficiency gains in light duty vehicles are dramatic with higher octane fuels. And the auto industry is looking at variable compression engines, turbocharging, and other ways to squeeze mileage out of cars while reducing carbon.

But let’s talk about real savings. A 25-30% blend of ethanol is proving to be the sweet spot in terms of performance, mileage, and overall value. Doubling or tripling up on the 40 cent differential not only puts real money back in all of our pockets but sends our friends at OPEC a message that they are not going to going to set the rules of the game anymore.

And not to be overlooked, are the health cost savings ethanol can bring by replacing toxic aromatic compounds in gasoline. The slow, painstaking road we have taken to finally come to grips with the dangers of tobacco and second hand smoke is a lesson we need to apply to gasoline. The same carcinogenic particulates can be found in both and like tobacco, we need to kick the habit.

In the biofuels sector we can work with the oil and auto industries and make a better fuel. Despite the hoopla surrounding reports of electric vehicles and talk of banning the internal combustion engine, it will continue to be the predominant source of propulsion for decades.  Renewable ethanol from our abundant natural resources can ensure that we control our fuel future and keep consumer costs in check.